The Rose Garden B & B is located just 50 minutes drive from Glendalough, one of Ireland’s most beautiful visitors’ destinations.

Glendalough is home to one of the most important monastic sites in Ireland. This early Christian monastic settlement was founded by St. Kevin in the 6th century and from this developed the “Monastic City”. Most of the buildings that survive today date from the 10th through 12th centuries. Despite attacks by Vikings over the years, Glendalough thrived as one of Ireland’s great ecclesiastical foundations and schools of learning until the Normans destroyed the monastery in 1214 A.D. and the dioceses of Glendalough and Dublin were united. Close to the monastic city is the interactive centre. The centre features an audio visual and has a model of the monastic site on display. You will be welcomed by a friendly and knowledgeable staff where all your questions will be answered.  Glendalough is one of the top attraction on Ireland’s Ancient East

Laragh (Irish: An Láithreach, meaning Site (or ruins) of a Building) is a small picturesque village in County Wicklow, Ireland. It lies at the junction of three roads through the Wicklow Mountains ( R115, R755 and R756) and is primarily known for its proximity to the Monastic City of Glendalough. Sally Gap and the Glenmacnass Waterfall are to the north, to the west is Glendalough and the Wicklow Gap and to the south is Glenmalure Valley. The area is deeply wooded, with the hills and mountains rising from the valley and due to its closeness to Dublin, hill walkers (or hikers) and tourists converge on the village as their centre for recreational activities in the mountains. About 5 km from the village, on the Rathdrum road is the 100-acre fun park Clara Lara. 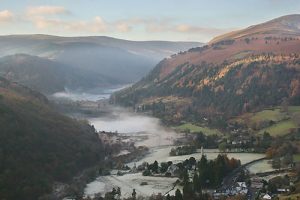 The stunning view of Glendalough